The sex forums and escorts 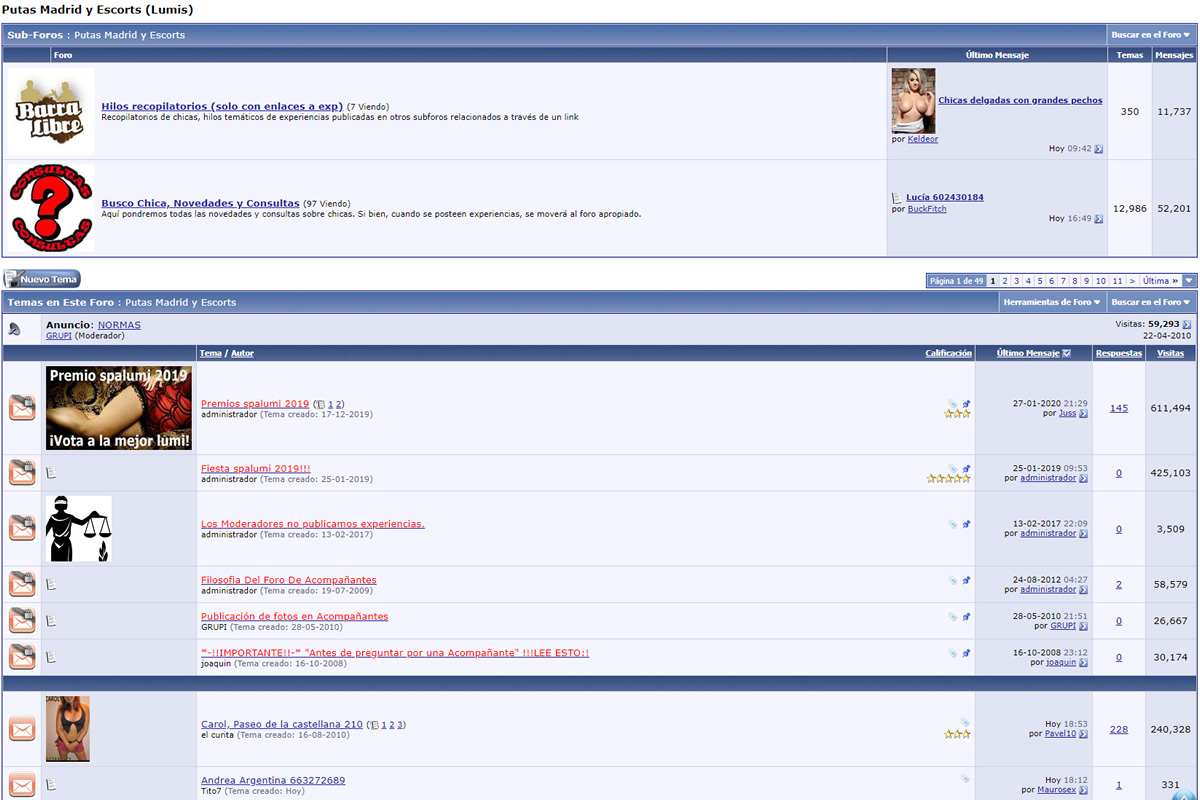 We men like to fuck. And we also like to tell that we have fucked. We are like that famous bullfighter who slept with a Hollywood actress and at the end of the "job" left her in the room and ran out. "Where are you going so fast?" She asked him. "To tell," he replied. The bullfighter of yore, surely open to criticism from a radical feminist perspective, did nothing other than what the vast majority of men would have done: tell that he had fucked. And that he had also fucked a cannon girl. This, which used to be done only and exclusively at the bar counter or at friends' gatherings, is also done today in many cases in a much larger and absolutely virtual bar: the sex forums.

Internet forums are, according to a more or less authoritative definition, an online discussion site where people who participate in it post messages around a topic. With these messages, the forum participants form a hierarchical conversation thread. In this article we are going to talk about some very specific forums: those in which men dedicate themselves to sharing and commenting on their sexual experiences with female sex workers.

And it is that the prostitutes, experience shows, not only like to hire the services of a prostitute and enjoy her company. The real whore, who regularly hires the services of an escort girl, also likes to comment with other whorers how they have done with her and listen to the recommendations that those other whores who participate in the forum. This, of course, is a double-edged sword for the prostitute who is the subject of comment. Its reputation can be strengthened or, on the contrary, irretrievably sunk depending on the comments that are poured on the forum about it. And it is that a succession of bad reviews is not good news for anyone, but much less for an escort. 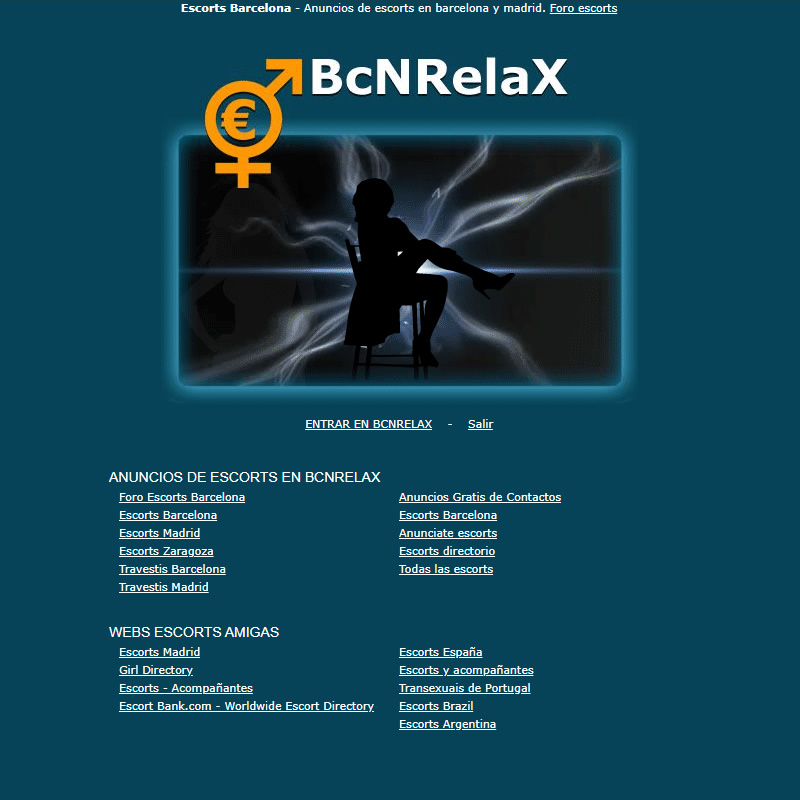 In sex forums, users comment for example if the girl sucks or does not suck it well, if she is nice, if her appearance matches the one shown in the photographs, if she smokes or does not smoke, if she speaks the language, if she has the age he claims to be or, at least, if he looks something older. In the forums, the whores talk about the prostitute they have slept with and comment if she has natural tits or if her breasts are operated, if she does the Greek or if she refuses to be shoved in the ass, yes Does he or does not put a condom on you when putting it in your mouth ... Anyway: all the details that may interest other whores who have been attracted by the image of that callgirl and have the thought of contacting her.

At the end of the day, if someone who has gone whores tells you the whore with whom the mother of a very reputable mother has dated, why not believe him? Why not trust someone who tells you that when deciding on one girl or another? In the same way, if someone tells you that the whore in question seems to be looking at the clock the entire time of the date, why not take that into account when selecting which escort lady to date? The decision, in the end, will always be yours. After all, it is easy to talk. And much more protected behind a fictitious name. And it is also necessary to bear in mind that there are very resentful and very spiteful people, and that the freedom and impunity provided by means such as forums for clients of whores can serve as a channel for avengers without reason and bad people in general. dirty the name of a good professional. As it is always said, the goodness or the badness of social networks and the tools that the internet offers us do not depend on those networks or those tools: it depends on the use made of them.

Taking this into account, the users of the comment forums about escorts end up becoming prestigious with their follow-up to a series of forums. Among the most popular forums of this type in Spain we can highlight those of Sexomercado, Spalumi and ForosX. Consumers of prostitution come to them in a majority to get opinions about the escorts who practice their profession in the main Spanish cities and to get an idea of what it should be like to fuck with one of them. Mention also to the extinct BCN Relax that a few years ago left us ...

Under the umbrella of the Sexomercado brand, there is a group of websites (sexomercadomadrid, sexomercadobarcelona and sexomercadospain) that are well known and valued among puteros in our country. This site offers its users the possibility of accessing one of the most valued prostitution forums in our country.

Beyond offering the opportunity to participate in its forums, this site also allows you to consult classified ads, access the reservation of hotel rooms, visit various blogs specialized in topics related to sexuality and prostitution and buy products in an online sex shop.

In its statistics section, Sexomercado also offers its users complete information on which are the most visited blogs, the topics in which they have participated the most, the most viewed albums or, for example, who are the most active users.

Along with Sexomercado, Spalumi is one of the best-known and most valued forums for Spanish whorers in our country. On its home page, this whore-client forum lays out the rules that must be followed to participate in it. One of them is not to use the forum to promote girls. This, without a doubt, is something that can be done by creating different profiles and using those profiles to speak highly of a specific sex professional. The professionalism of the managers of this type of forums should prevent them from being used for this purpose. Using whore forums to promote a particular lumi would violate the founding spirit of such a forum. The Spalumi management team seems to place special emphasis on this aspect and threatens to ban (prohibit their access to the chat) the user of the site who engages in these practices.

ForosX is also, as we had previously indicated, one of the most famous Spanish sex forums. In addition to its forum and the open threads in it, ForosX has other content all related to prostitution and all of them aimed at serving prostitutes to help them in the often difficult task of choosing one lady or another. For example: ForosX invites its users to know the experiences that some of them have had with a girl and allows access to the advertisements of a large number of company girls who provide their services in Barcelona, Madrid and Tarragona. For many hookers, this paid sex forum is a reference page. 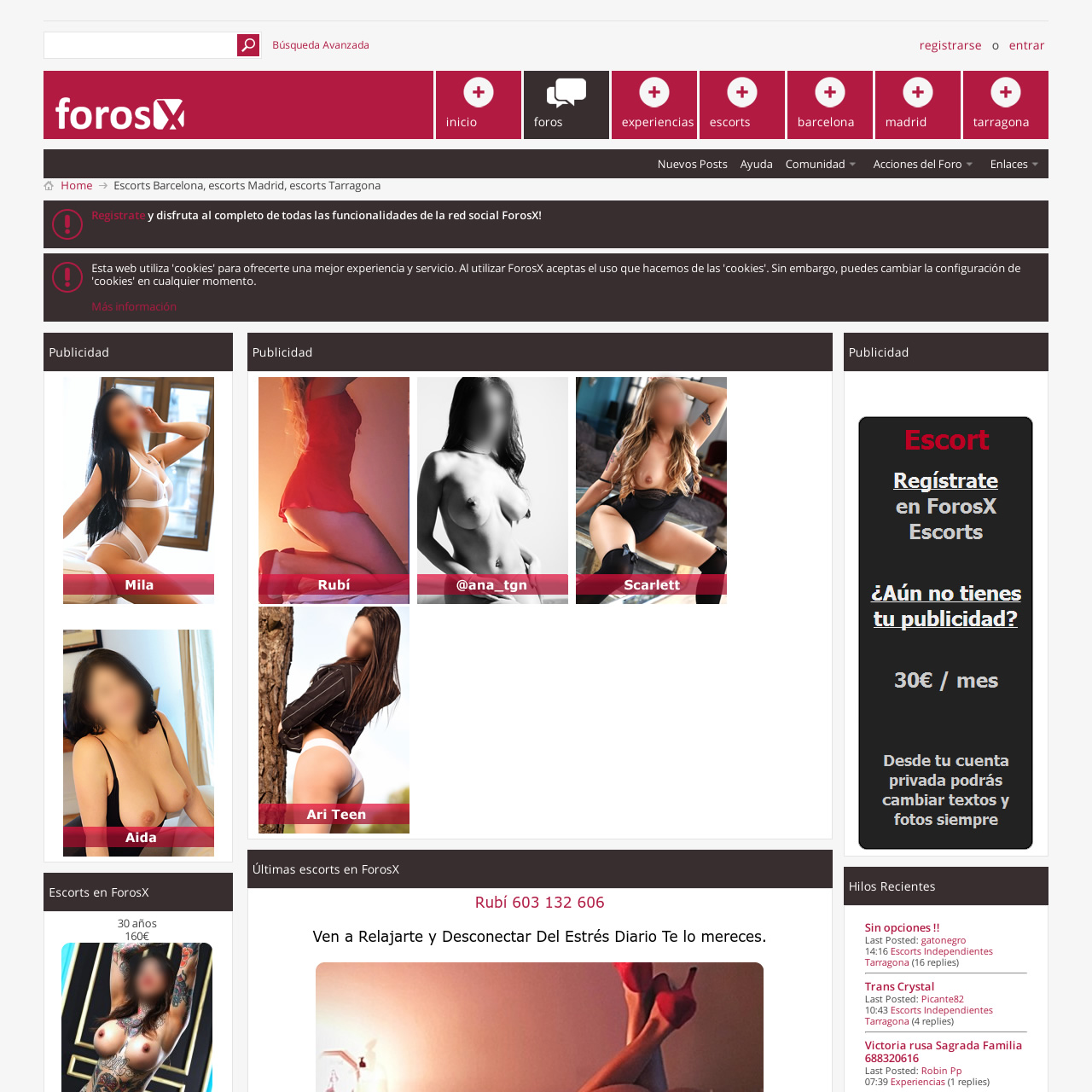